Diplomacy in action at CWMUN 2014

Besides the awards, the LFNY participants at Model UN this year learned what it takes to persuade people and pass resolutions. The 18 Y9 and Y10 students came out with a lot of enthusiasm from their experience, working alongside 1500 other high school and college students from 14 different countries. During this annual event sponsored by the UN, students learn to confront a range of topics with the perspective of their assigned country or organization. Through these experiences – during preparation, in committee sessions, and even in hallway caucuses – students develop an appreciation of differing viewpoints, experience the challenges of negotiation, see the rewards of cooperation, broaden their world view, and discover the human side of international relations and diplomacy. 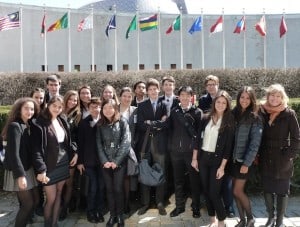 The LFNY Model UN team in front if the international organization’s General Assembly on March 23, 2014.
In preparation of this year’s Change the World Model United Nations (CWMUN) conference, moderator and LFNY history teacher Carine Gibert invited a trainer from Associazione Diplomatici, which sponsors the conference, to address students at the Lycée. In addition, a journalist from United Nations radio, Stephanie Coutrix, met students prior to the conference to explain the role of media at the UN.
This preparation paid handsome rewards when the Lycée Français’s MUN Team participated in the CWMUN Conference for the second year from March 21-23, 2014. Our 18 students in Y9 and Y10 represented the school proudly alongside 1500 other high school and college students. A total of 122 high schools sent delegations from 14 countries to attend the conference held at the UN General Assembly Hall and in the Grand Hyatt Hotel.
“Not just words on a homework assignment”
Students simulated the functions of the UN General Assembly, Security Council, Economic and Social Council, and Committee on Science and Technology for Development. They studied issues such as urbanization and development, women and development, technology in the Arab Spring, and security in space. “Model UN gave me the opportunity to actually feel and address world issues with my own voice“, said Phenix K, one of the participants, “in a classroom, world issues only seem to be …words written on a homework assignment, but here at Model UN, I finally came to realize that all global issues apply to everyone and not just to those broadcasted on television.”
The Lycée was recognized with several awards for its participants. Javier E. and Michèle M. garnered awards for their position papers submitted in advance of the conference. Tara S. and Emile W. (Australia) and Celine B. and Rhéa K. (Rwanda) received honorable mention for their simulation of their respective country’s delegation. “The most memorable moment of this conference was probably when our resolution was passed“, said Rhéa, “Our topic, the role of technology in the Arab Spring, is very controversial. After a lot of debating, persuading, and hard work, our coalition not only managed to get our points across, but we wrote the resolution with the most approvals and signatories.”
Representing Australia on the UN Security Council, Javier E. was attributed an award of excellence for his simulation. He was also recognized by his fellow delegates for distinction. “There were three kinds of people: those who were prepared and harassed you with quotes and documents; those who weren’t prepared but could still pull it off and adapt to circumstances; and those who were not prepared and simply sat in the back saying nothing. So unless you are very prepared, you better be of the kind that adapts”, said Javier after the conference.
All the participants benefited from the learning experience of collaborating with international students to formulate resolutions and forge coalitions in response to problems facing the world today. LFNY Secondary students also participated earlier this year in another simulation event at Harvard. 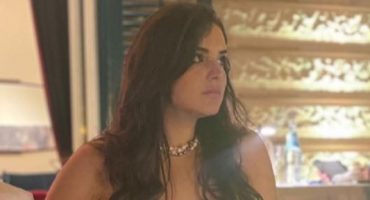 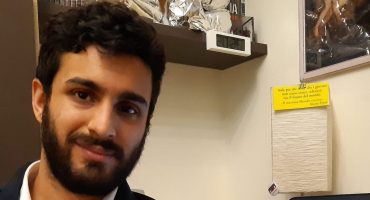